When Oklahoma residents voted in favor of State Question 788, which permitted the licensed access to marijuana for medical card holders, a number of conflicts and legal problems were created.  While on one hand, it enabled citizens with serious medical issues to access therapeutic and legalized cannabis, the legal implications were far reaching, into other areas including private gun ownership. 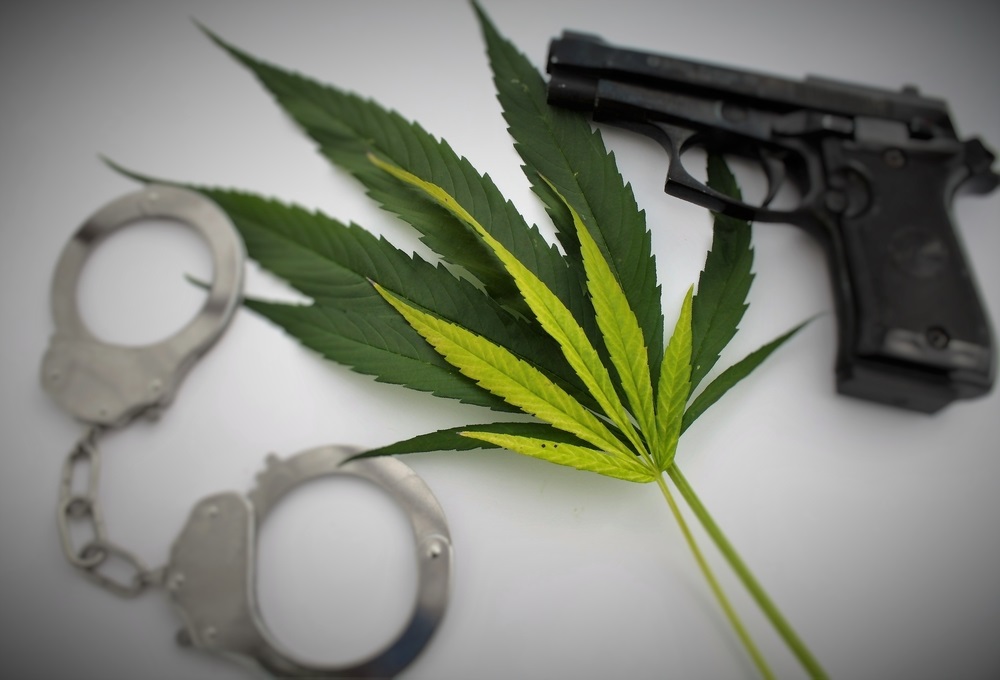 What difficulties will Oklahoma residents experience if they are a medicinal marijuana card holder, and wish to acquire a handgun?

In this article we’ll talk about the conflict that legalized medicinal marijuana card holders are facing right now, and the legal liabilities and impacts they can face with a gun on their premises.   We will also discuss upcoming proposed legislative changes that are currently being written, to address the conflict in State and Federal law, regarding medicinal marijuana and gun ownership.

Oklahoma state law decrees that any person who is “ineligible to possess a pistol due to any provision of law of this state or the United States Code” shall be denied the right to have a handgun license, citing the Oklahoma Self- Defense Act. (21 O.S. § 1290.10 (9))

Regardless of the laws mandated by States like Oklahoma who have legalized medicinal marijuana for registered card holders, cannabis remains a Schedule II drug and illegal controlled substance, for both recreational and medicinal use.

“Title 18 USC § 922 (g) (3) federally prohibits anyone “who is an unlawful user of or addicted to any controlled substance” from firearms possession.”

Distribution or sale of cannabis in the State of Oklahoma remains a felony offense, with the following standard penalties and fines:

Currently in Oklahoma, any possession of marijuana (without the provisions added for Medical Marijuana Patient License Holder’s) carries a fine of $1,000 and up to one-year incarceration, with a misdemeanor charge.

What Should Current Medical Marijuana Card Holders Do If They Own a Handgun?

The Oklahoma Self Defense Act (SDA) (21 O.S. § 1290.9 (6)) directs that if an SDA license holder and gun owner becomes a Medical Marijuana Patient License Holder, he or she is expected to surrender their SDA license.   We know that this is not what licensed gun owners wish to hear, but there are significant legal consequences for non-compliance.

If you are thinking of retaining your current SDA gun license and removing any guns you currently own from your premises, it is true that the Federal law currently only prohibits the Medical Marijuana Patient License Holder from having possession of a firearm; in the home, on their person, or in a vehicle.

However, as a registered Medical Marijuana Patient License Holder, you are required to surrender your SDA license when you receive your medical marijuana card.  It is currently illegal to retain your gun license while being a card holder, however you must take the appropriate steps to surrender the gun license; it is not automatically surrendered, nullified or canceled when you receive your MMPLH card.

The consequences for carrying a firearm without an SDA handgun license may be a charge of Misdemeanor Unlawful Carry (21 O.S. §1272).  It is important to note that medical cannabis card holders can also be charged with Misdemeanor Unlawful Carry, if they are in possession of unloaded weapons, and other weapons including, daggers, brass knuckles and knives.  Hunting equipment, and weapons used for active participants engaged in historical reenactments are excluded.

Can I Give My Guns to Someone Else to Hold for Me?

The restrictions to gun ownership and license issuance to medical marijuana card holders in Oklahoma are currently being evaluated, and legislators are working on a bill to amend some of these restrictions.  In the mean time, if you are a card holder and you have guns that you would like to hold on to, you may be thinking about giving them to a friend or family member to safely store for you, until the legal restrictions have been addressed.

Before you hand off your guns, be aware that TITLE 21 § 1289.12 Giving Firearms to Prohibited Persons indicates that giving your gun(s) to anyone who has been convicted of a felony offense, or someone who is mentally incompetent, emotionally disturbed or an individual who has an addiction health issue to alcohol or drugs, is a misdemeanor offense.   You can face a fine of $500, and a minimum 10-day jail sentence, with maximum penalty of 6-months incarceration.

Oklahoma Senator Nathan Dahm, (R-Broken Arrow) has proposed Senate Bill 959 which would change the laws and prohibition of firearms for Medical Marijuana Patient License Holder’s.  Card holders would be able to legally acquire a gun and concealed carry license.

"Nothing in this section shall be construed to allow the Oklahoma State Bureau of Investigation to deny an otherwise qualified applicant from obtaining a handgun license pursuant to the Oklahoma Self-Defense Act solely on the basis of the applicant being a lawful holder of a medical marijuana license."

If you are facing a charge relating to an unlicensed gun possession, and you are currently a Medical Marijuana Patient License Holder, contact our legal team at Compton Law Firm to schedule a consultation.  Get the help you need now.